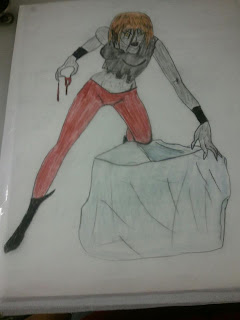 Who is this? Read to find out

It was a silent walk to the house and then to the graveyard. When we got there, I moved my boys to the edge of the graveyard, and trapped them in a circle of salt. It would prevent Beelzebub from killing them. “Sorry boys. I told you I would allow you to be bait, didn’t say you could fight this one. I have too many secrets and I am a grown woman who made the mistake of being a selfish being, but you know what? I would do it again.” I said with a sly smile and ran from their safe spot to my grave. “BEELZEBUB!!! Come and get us!”

He didn’t come. Go figure. My boys were yelling about something, and I turned and watched as Beelzebub hovered over their protection trying to break it. “Glutton yourselves! Eat yourselves. DO IT!” Thankful the salt and herbs protected them, and of course of their Guardian blood.

“BEELZEBUB! You can’t touch them. Come for me!” I called to him.

My voice got his attention. “You, of course it would be you that father sent to bring us back!” He came at me, but I was prepared. I dodged his attack.

“Who else, after all he wants to make me his wife!” I yelled at him, sword drawn.

“You will never be!”

“Of course not. But that doesn’t stop his want!” I was baiting him and I knew it. And he attacked.

I don’t know how long the battle went on. All I knew was I felt my insides burn with his poison on his claws. I knew that my desire to keep my boys alive will turn them against me one day. But not today. I hoped, as I fought for my life. For each hit I made with the sword he made a slash on my body filling my blood with a poison that not only boiled my blood, but affected my nerves and brain. I knew I had to end this soon. I was going for the kill when I saw my protection fell around my boys and they rushed to my aid. I couldn’t allow them to be killed, I saw Beelzebub take a swing at them cutting them opening and poisoning them. And something inside me broke.

Darkness overtook me, my eyes turned black as coal, then the black was drowned out by yellow; I could see their reflection in Beelzebub’s eyes. The only black in them that remained was slit where my pupil once was located. “Wrong move.” I told him, but my voice was not my own. I felt a brief moment of pain as claws grew, and fangs of a werewolf replaced my teeth. “Now you will die.”

I attacked him, I ripped him apart. I barely remember it. I remember the black purple blood of Beelzebub. I remember the shock on his face and I noticed my boys stood with their weapons ready to fire. But not at Beelzebub, but at me. I tore of Beelzebub’s head with my new teeth and claws. I stabbed a hell made pocket knife into his heart and dropped his head as his body turned to ash. His head, I staked, with a silver stake from hell, and it too turned to ash.

I dropped to my knees and I felt myself change back into human. What had happened?

“Kari, honey…” James had fear in his voice and I cried.

“Mom, that was bloody awesome!” Asher yelled out.

“Mom?” Killian had more concern in his voice.

“What have I done?” Did I let darkness win?

“You sent Beelzebub back to hell.” It was Bes’s voice I heard. “Knew you had some darker powers in you, and now I know the trigger. Wonder why they didn’t show up back in the war?”

“Everything has a time and place.” Bes said. “I think you all need to go home.”

I just nodded, and allowed James to help me up. But I knew in my heart this was only the beginning of what was to come. What else lurked inside of my soul? And how could I prevent it from destroying the only good in my life? My husband and sons. I don’t know, but I knew right now this one thing Lucifer was rejoicing at the slip. But I was a grown woman and it seemed I no longer and any secrets from myself. Nobody knew what I felt inside. Nobody ever would. Nobody, could know the pain in my soul over this revealed secret. I almost have no secrets from the world now. But I knew that I wanted to love the man who called me angel. And right now I would hold onto that love. That would be my only hope for salvation… God help me…

Posted by Katherine Rochholz at 1:10 AM