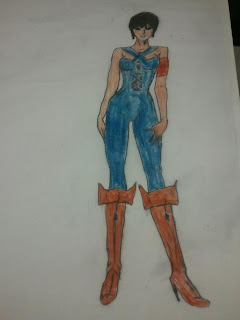 So I promised a couple Excerpts so her is the first one! Meet Mary!


“Boys why don’t you go get some pigs blood. I don’t want the vamp forgetting any key details.” I said with a nasty glint in my eye. I knew the vamp. She was around America during the Revolution. She was the one that turned Guiran’s love. She is the one that staked me to a tree.

“Ok.” Killian said, he noticed the look in his mother’s eye and didn’t want to be around. “Come on Ash.” And he knew she just wanted them out.

“James you should go as well.”

“Fine.” I waited until the boys left. Then I walked right up to the vampire. I lifted her head and looked her in the eye. “Well, if it isn’t Mary.”

“Haven’t gone by that name in a long time, vamp.”

“Doesn’t matter, you still are going to tell me what I want then I am going to destroy you.”

“Figured. Damn pure blood demons. You are only half blood, like me. You are like me, you know?”

“Never. I know good from evil.”

“You lines are blurred. How many mortals have you killed? More than even I.”

“Whatever.” Her words were hitting close to home and we both knew it. Before I fought her first time, we already had known of each other. In fact, she was my cousin, many times removed, but we figured out we were related one night before she was a vamp, and before I was a Guardian. As we sat in a Hunter’s Bar. She was my family, her and her husband Phillip. “Cousin.”

“Oooo… not afraid to let him know you are you? I am shocked you married him, told him, made him a Guardian. You hate this immortal life.”

“Yeah, but killing you and torturing that ‘person’ you cared about during The Revolutionary War was fun.”

“I am sorry I never told you how much you and Philip meant to me, Mary.”

“My mother was a mortal once, turned demon.”

“You never cared. You used us!”

“I LOVED YOU AND PHILLIP YOU WERE MY FAMILY!” I yelled in her face and then sliced her with a thin blade dipped in a dead man’s blood.

“Shit! That hurts. But you never had a stomach for torture. You always went for the quick kill.”

“I have been in hell enough to know a thing or two.” I said as I let the sharp tip of the knife carve into her skin.

“Damn…” She took a sharp intake of her breath. “What do you want to know?”

“Don’t know who you are talking about.”

I cut carved a chunk of her flesh around her thigh out and listened it fall to the floor before I asked again. “Where is Beelzebub?”

She spit in my face. “Don’t know bitch.”

“Wrong answer.” I dipped the knife into a jar of dead blood and used it to carve small symbols, holy symbols of course, into her body. The dead man’s blood made sure they hurt as hell all through the healing and burning process.

“Fine!” She screamed when I got to the bottom of her feet. “He is held up in the location you burned to the ground!”

“Yes!” She screamed as I continued to cut holy symbols into her body.

“Where in the grounds?”

“Fuck you Bitch!” Mary spit in my face again and pissed me off more.

“Wrong answer.” I said as started to skin her bit by bit. The skin fell to the floor in sickening splats.

“Your burial place! Where that bloody Guardian Bes buried your body!”

“Thank you!” I said as I drove the Aspen stake through her chest and used the sword at my side to cut off her head, and then I sank to the ground and cried. My Hunter family really was gone. First Phillip and now Mary.

James came over and hugged me to him, and I just cried into his chest. Taking deep breathes, but I couldn’t control my sobbing. I killed her. I finally killed her. I knew the second she was turned to a vampire I would have to be the one that would kill her. But I killed her I couldn’t believe that day had come. I killed her. I got up and pulled myself away from James and ran. I just kept running into the middle of the desert. I could not take it. I lost the last link to my old life. My life before I was a Guardian. That last link was now forever gone. I had nothing else. I was only what I looked at in the mirror. A selfish Guardian. I took what I was offered. I was selfish; I should have never allowed James and the boys to become Guardians. I should never have allowed it. I can’t believe what I had done. I had destroyed so many lives. How was I going to fix this?
Posted by Katherine Rochholz at 12:29 AM