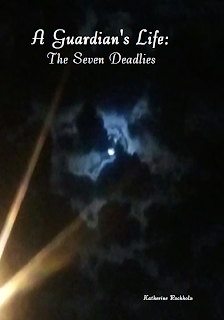 Blurb:
Kari, born Catherine Von Kampen,
Born
October 31st, 1472
Became a Hunter
May 1st, 1490
Died
November 16th, 1492
Brought Back to Life
November 16th, 1493
AS A GUARDIAN
She gave her life to fight the beings of hell, and now she will give her soul to continue the battle.

Excerpt:
I stood up and stood in front of him and pulled the tip of the gun and laid it flush with my heart.  “Shoot me.”
“But…”
“That part that hates me, that part that wants to shoot me will grow larger if you don’t shoot me!”
“What will happen?”
“The bullet will go through my chest, and overnight I will be dead.  The next night, well, it will be like it never happened, except for the evidence on my shirt.”  I take off my shirt.  “There now there won’t be any evidence but some blood, but that can be cleaned.”
“But…”  Colt just stared at me.  I never wore a bra so I was half naked standing in front of him.
“SHOOT ME!”
“I can’t…  Part of me wants to but I can’t!”
“SHOOT ME!”
“No!”  Before I could figure out what had happened he had dropped the gun and grabbed me and pulled me on top of him and he kissed me.
At first I fought the kiss, but he kept kissing me, and he moved his calloused hand up my side to cup my breast, and I gasped.  He took that moment to deepen the kiss.  And I stopped fighting.  I kissed him back.
He laid back and I followed, he rolled me over and I was on my back, I wrapped my legs around him and kissed him with everything I had.  I didn’t even notice the knife until the tip of the silver blade that entered my skin, pierced my heart.  I gasped then I was silent.  Blackness over came over me and when I opened my eyes the demon that loved to torture me was standing over me with a smile on its face.  One day dead on Earth was about a hundred and eighty three days in hell.
Posted by Katherine Rochholz at 11:21 PM