For The Guardians Of Earth…
Time Shall Stand still…
Kari, Catherine Von Kampen, was born October 31st, 1472.  Her life revolved around her younger brothers.  Her life was destroyed by a demon on May 1st, 1490.  She picked herself off the ground and became a Hunter.  She was killed during her mission to seek revenge on November 16th, 1492.  The Death Fairy gave her a the choice to become a Guardian.  Forever shall time stand still, while she huntes down the being that destroyed her reason for living.  She took the opportunity presented to continue on her path for Revenge.  She came back from Hell on November 16th 1493, and has continued to hunt the beings of hell ever since.
Flash forward to the year 2012.  Kari was happy with status quo; she had her soul mate, James Colt, and his two sons at her side.  However now she has opened a door to Hell releasing The Seven Deadly Sins from their cages in Hell.  Now she must not only battle The Deadlies to send them back to their place in Hell; She must fight a growing attraction to The Morning Star… Lucifer himself…
Will the hunt for The Seven Deadlies destroy her chance at redeeming her soul?
Or is this truly her destiny?
Like the Mythical Phoenix, she rose from the ashes of death to defend mankind from the demons of Hell.  Kari Gave her life to fight the beings of hell, now she will risk her soul to continue the battle…
Join her on her journey to Hell and Back… 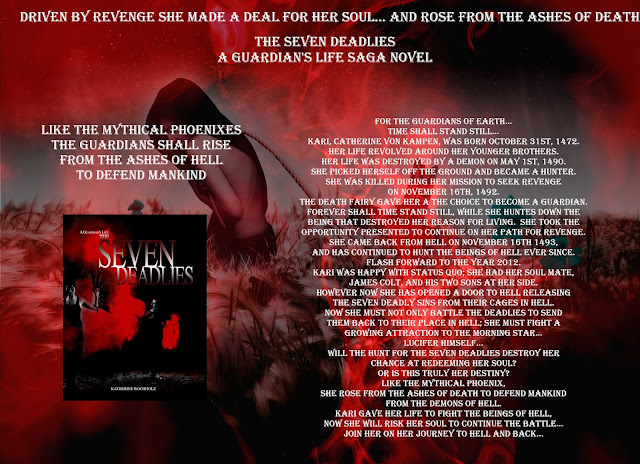 Posted by Katherine Rochholz at 9:29 AM