The Pin of Electrokinesis Masters of The Katy Lily Series

The Pin of Electrokinesis Masters of The Katy Lily Series

Electrokinesis is the main study of Spirit Elementals. The Masters of this Element choose the Axe as their Pin. The reasons behind this strange symbol for Electrokinesis stems from folklore, where stone axes were believed to be thunderbolts and were used to guard buildings against lightning as it was believed that lightning never struck the same place twice. In Youba Mythology an Oshe (double bladed axe) was used to represent Shango, Orisha who was their god of thunder and lighting. Steel axes were important in superstitions as well. A thrown axe could keep off a hail storm. Sometimes an axe was placed in the crops, with the cutting edge to the skies to protect the harvest against bad weather. Due to these beliefs and they wanted something with a deeper meaning they chose the Axe as their pin.

The Electrokinesis Masters At Bridgett's School For The Magical Arts: 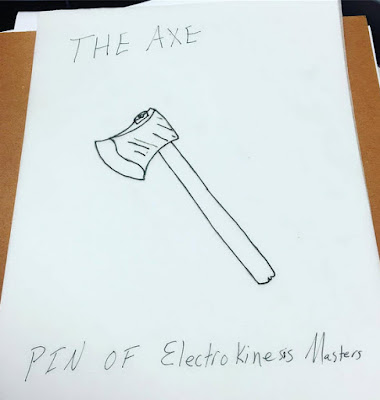 Posted by Katherine Rochholz at 11:44 AM