The Pin of Potion Masters of The Katy Lily Series

The Pin of Potion Masters of The Katy Lily Series

The cauldron is a symbol of transmutation, germination, and transformation. When one thinks of potions they think of cauldrons so it isn’t a shock that Potion Masters choose it as their pin. However, above all is symbolizes the womb, and therefore, is a Goddess symbol as well. There are many beliefs around cauldrons, example in Celtic lore the cauldron is the symbol of the Underworld. Some of the most famous cauldrons are found in Celtic lore. For example, the Daghda cauldron that provided sufficient food for everyone, and the cauldron of Bran the Blessed that conferred rebirth. It came to symbolize the womb of the Great Goddess, this belief arises from the concept that everything is born out of it and returns to it. The original cauldron symbols were gourds, wooden vessels, or large shells. Eventually the symbolism of metal cauldrons became linked to the hearth and home because they were used to cook meals. Cauldrons have held a magical significance in many cultures throughout the centuries. Because of these deep beliefs it is no shock the Potion masters choose this well-known symbol as the 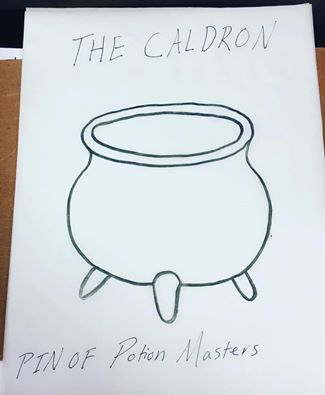