The Wand symbolizes power. It is seen from the Bible to fiction and the World of Katy Lily is no different. The Wand is a grounding source for one’s power. The wand and its magical powers had its cultural origins in an ancient symbolic language, which was also used in the narratives of Holy Scripture. For instance, when Moses frequently stretched out his “rod,” miraculous things always followed this symbolized power from God or Divine power. According to theologian Emanuel Swedenborg, in the original language used by ancient shepherds, a rod referred to a traveler’s staff. A traveler’s staff represents the power of supporting the body just as the power of truth supports and serves the soul. This is the reason why shorter “rods” or “staffs” that became known as wands were used by kings to represent the power of truth (from God) residing within their royal proclamations and edicts. These wands used by the royalty were called scepters. A shepherd’s staff symbolized the power they exercised over their flocks. The Romans even used sticks tied together in bundles to symbolize the power of laws that served and promoted the common good of society. It is because of this symbolism that Egyptian magi made use of rods to perform their miracles. Finally, this symbolism was further modified to become a magician’s wand. In Katy Lily the wand is there to harness and balance the elemental magic within the person’s soul. That is why those who master in Spells, also known as Spell Crafters, chose this very ancient symbol as their pin. 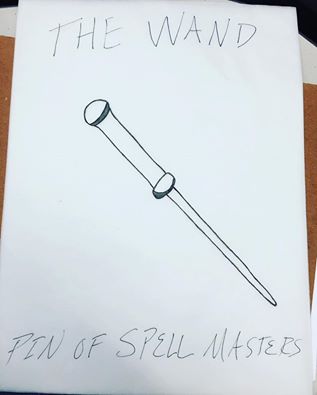 Posted by Katherine Rochholz at 6:11 AM