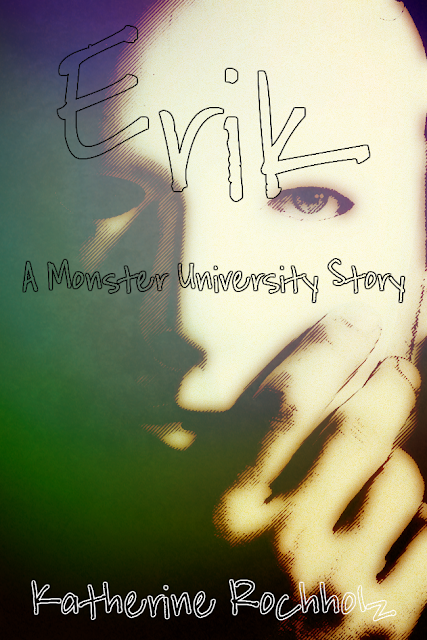 "I put on my mask every day. This mask that hides who I am. I don't know if I know who I am anymore. After a while the mask becomes you. You don’t know where you stop and the mask begins or the mask stops and you begin. After this long you become the mask and lose yourself to the monster within. To break this curse I need to gain 'true love' no matter what I look like.  Seriously true love is things of fairy tales. And what woman is going to care about me when I am nothing but a killer. I stalk my prey, I learn them, I love them, and then I drain their life force by setting them on fire. It gives me a satisfaction that I never had in life. Of course it could be because I was killed in a fire by the fiancé of the woman I loved. But I have always had a fascination for fire, from the first that disfigured me in life, to the one that took my life. Unlike most of my friends I never changed my name. It is the only part of me I can have that is mine anymore. My faces, my masks, never are; so I control things where I can. And when I find my next victim I want her to know who is taking her life."
Erik put out the flame he was playing with as he had to head into class.  He was eyeing all the women. Two years at this college and he hadn't yet found the perfect person to give him his next boost of power. To keep him young forever. He wasn't handsome under his masks.  But they never saw behind the masks. Never would. Because behind the masks there is nothing but evil. He sighed as he looked over the most recent class of newbies. He was a TA just like Hal.  It was the best way to find what they needed and to gain the trust of their choice victim or victims. Except where Hal’s class was History under Ian, damn bloody incubus, Erik was a theater TA. He smirked at that. No matter what he seemed he couldn’t get away from theaters. After all burning them down was just as empowering as killing his chosen victims. He sat down with a bored expression on his face. They were actually going over the play of his mortal life. He hated that play. Even if he sold the story it to gain some money long before he meet the ‘Brotherhood of Monsters!’ That wasn’t the real name of course. Bleu calls it Monsterhood, Lucas calls it pack, Frankie calls it family, etcetera, etcetera. Erik yawns as he sits in front of the class and spaces out as the teacher lectures about the production they will be doing of the Phantom of the Opera.
He didn’t even lift his head until he heard a honey voice ask if there would be auditions or assignments. He looked at the woman. She reminded him a lot of Christine. She had the same honey voice. His story had been given a somewhat happy ending in the play but to be honest that is not how things happened. Nope there was no happy ending, he blew up the whole damn place and burned Christine alive for trying to leave him. He tilted his head. And answered for the professor. “We have been watching you these weeks and have assigned you all a part. You will be notified at the end of class.”
The professor nodded. He hadn’t wanted to do auditions but didn’t know how to state he didn’t bloody care. He had to do this play because it was a request of the dean. He honestly didn’t care for the play at all either. He knew his TA was less than thrilled as well. “That is correct. Erik will be handing out the parts. If you have questions please go to him during his office hours.”
Erik smirked and handed out the titles of the characters stopping next to one Haley Chriss. “Here you are Christine.” He gave a charming smile.
“Thank you Erik.” She smiled back at him before her boyfriend came over and glared at Erik.
“Ready to go babe?”
“Yes Ralph. Let’s go.” She rolled her eyes.
Over the following weeks the class rehearsed and then they were going to put on a one night show for the school. Erik’s plan however was to kill Ralph and Haley.  He smiled and hummed as he set the stage for the grand finale. He had everything planned. Tonight was the first time in a long time he found the perfect victims. He could have tried to get Haley to love him but what was the fun in that? After all love was a fairy tale… one that would never be for him.
Haley takes about deep breath as she enters the stage starting out reconnecting with her childhood friend and going through the steps of falling in love and becoming engaged. Through the moments of the phantom preforming malevolent acts. Especially when the person who was set to play Carlotta is almost killed by the stage prop. What the audience doesn’t know is that Erik did really try to kill her, but alas it wasn’t meant to be.

Through Haley playing the kidnap victim. Which Erik played the phantom. He really did take Haley and tie her up. Forced her to view him. Taking off his masks to show her what truly lay behind the mask of her beloved TA. When he is unmasked Haley gets to behold his noseless, lipless, sunken-eyed face which resembles a skull dried up by the centuries, covered in yellowed dead flesh. However Haley thinks it is make up and fakes her screams of terror. When Erik goes to force his ring on her; he really does force the same gold band he forced upon Christine a long time ago. It would start the draining of her soul, and when he placed it back upon his finger he would gain her life force and the life force of Ralph as well.
The audience gets into the play, as Ralph promises his leading lady to take her far from the monster. But Christine can’t be run off. She is going to give one last show. Erik takes her and has Ralphy boy strapped up to the ‘bomb’ and soon is telling her to marry him. Telling her to be his. However that is not going to happen. Christine isn’t in love with this Erik and this Haley isn’t really in love with Erik. Haley may be in lust with the mask but never in love. And Erik wasn’t in the mood to care. Hundreds of years hasn’t thawed his heart from that betraying witch of his Christine.  Erik steels a kiss outside of his masks. He steals the show. As he makes it look like that Ralph has started a fire. And it burns the theater. He makes it show like there is a malfunction and Haley goes and runs to try to save Ralph. Her love. But Erik traps them. He puts up a show and a half to try to save them getting ‘burned’ in the process. But nothing can save them. Soon the theater is burning to the ground and the firefighters are trying to put it out and Erik is being rushed to the hospital for burns. Thankfully Beth is on duty.
The next day the terrible news comes. Haley Chriss and Ralph Persia were killed in the fire. Erik Gaston was injured horribly but expected to make a full recovery.
Erik was out that day from the hospital and at the scene of the fire. He moved to see the bodies. He smirked. He bent down and grabbed the golden ring putting it back on his finger. “Sorry Christine dear, you should have just loved me so many centuries ago. I mean, your reincarnations are just as honey voiced as you were. Oh you didn’t think I knew?” He rolled his eyes. “One day you will become my ‘living’ bride. No matter what you think. No matter this curse. But right now there is just too much satisfaction killing you and your current lover.” Erik kicked the body of Ralph and placed a kiss on the skull of Haley’s head. “No matter the love I feel for you, my need for vengeance against my death and cursed existence is too great. I am sorry my love.”
At the funeral for Haley Chriss Erik limps up playing up his wounds and places one piece of paper in the coffin. For those who know Erik they know what it states. For those who don’t they think it is just a good bye. Erik left as they lowered the coffin. The paper lay in her hands and upon it in French it stated: ‘Christine has once again died. Erik once more grieves in his undead life.’
Posted by Katherine Rochholz at 12:00 AM