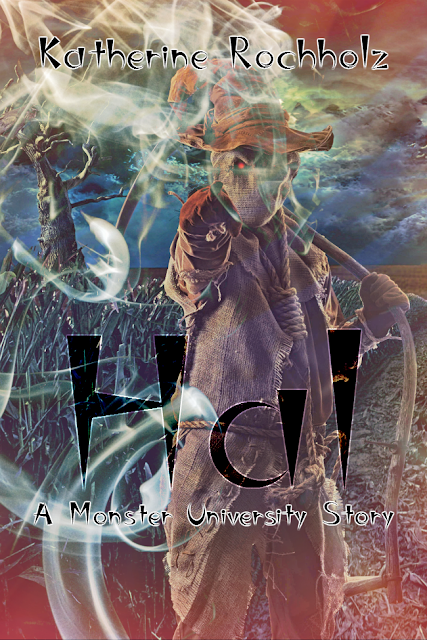 "In life I was the person who could charm and calm anybody.  In death my body was used to scare the animals away from the fields.  My soul was restless.  I mean I was murdered and the murderer put me up in a field as a scarecrow. Shower burlap bags to my body; stuffed them straw. I was murdered by a jealous man. After all I had it all. Town respect. A lovely wife. Three strapping sons and a princess of a daughter. And I had a silver tongue. I could get anybody to do anything I pleased. So yes, my soul was restless. So I made a deal.  I have to have the brain, face, heart and livers of five people during a year.  I tend to eat all five at once.  Less heat for our detective to deal with.  Can say traveling killer.  I look for my victims in the classes I am a TA for; after all they trust me.  They come to me.  I don’t even have to do the work.”

Posted by Katherine Rochholz at 12:00 AM