The Keepers and The Sisters of Lilith Prologue and Chapter One 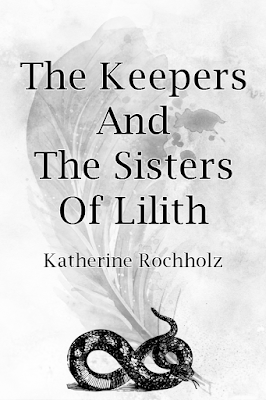 The one thing Abby hated when coming out of a healing sleep was her eyesight was always on the fritz. She saw the colors of souls, little spots- one for each soul she ever created, but today the amount of black made even this time hardened warrior want to cry. She sat up and took a deep breath. She checked the gash on her chest, thin and pink and soon it would be nothing. She stared into space as the black spots danced in front of her eyes as the souls choose their paths. Vengeful spirit, guiding presence, restless soul, or they move on; those were the choices for the souls she had created. She prayed they moved on. Not that her father listened to her pleadings anymore, she wasn’t even sure he knew what she been through these millennia on the plant she helped create for him.
Abby sat there and watched the spots as she got her magic, her power, her life force, under control again. Soon the spots became more like sunspots and that allowed Abby to focus on moving. Abby sighed as she sat in the sunlight, it seemed wrong it would be so bright after her people, her family of sorts, were all betrayed and murdered.
She was unsure how long she sat there, but she knew she had to move. She had to find… she closed her eyes in pain, to the very thought of the word, but she forced the thought out… replacements. She took a deep breath and whispered the word. “Replacements.” The word tore at her soul. But it must be done. The magic she had pumped into the ley lines she had created when her brothers abandoned Earth needed to be protected. She forced herself up. “I can do this. I have before.” She whispered to herself as her heart felt torn in two.
Abby moved to the middle of the room; she held her hands out in front of her and took a deep breath as she created a mist of magic that filled the room and when it lifted there lay the list. The list of unknown Keepers, Protectors, and Guides… Well, possible ones. She just opened she could keep the ones she will choose safe. She picked up the list. Now to find them, test them, and choose five Keepers, three Protectors, and two Guides. She looked at the list of dozens and cried because her lists used to be hundreds. The tears dropped on the list and as the tears smudged the ink, Abby couldn’t help but think of the list as a Death Warrant for the names listed. But she had no choices. With all the choices she made in her existence she still wonders if she made the right choice to give the world magic or if she should have threw in the towel like her brothers. However, it generally only took one moment for her feel the whole painful existence of magic was worth it. She sighed. She didn’t have time to waste with her doubts, because if she didn’t get the mines and catacombs back open and magic protected and the Sister, temporarily, stopped soon then she was afraid she would have to end the word to start it over… And that is not something she wanted to do, no or ever. Because for as much hate in the world, there was so much love. Cliché, yes she knows, but clichés are clichés for a reason. She moved to leave to feel the stickiness of her blood. She had time for a shower and a change of clothes. She could spare the fifteen minutes to clean up. After all, she was the one in charge of the end of the world.
Abby stood in the shower under the, almost scolding, hot water washed over her. She kept her head down and watched the red dyed water, dyed red from not only her blood but the blood of her chosen Keepers, Protectors, and Guides. She as good as got them killed by choosing Jesse. Of course, Jesse was young, naïve, but he had so much potential in him. Well, until Leslie slit his throat. Leslie was just like her mother and grandmother, and every other McKinnon female. An amoral human, with green eyes that showed their greed in Abby’s view. Green has been associated with greed since the dawn of sin. It was fitting that the McKinnon line was known for their pure green eyes as they were the greediest beings Abby ever has known to exist. She shook her head. She didn’t have time to dwell on her mistakes or the actions of Jesse. She had to test the names on her list. She had to find replacements or everything she has done to preserve the Earth would be for naught. She finished her show and threw on a pair of jeans and a long sleeve tee that had a name of her favorite show on it. She gave a weak smile. She was glad that the imaginations of her humans were never destroyed with how much bloodshed was in their history. She threw on her boots and grabbed the list. Time to find some Keepers. With that, once she was outside she took a breath and let her magic take her to the city of the first name: Dean Cooper, 24, Central Point Iowa.

Posted by Katherine Rochholz at 10:20 AM