All Rights Reserved
The Second American Civil War was truly a war between one family.  It was One Family.  Two Sides.  One War.  Both sides wanted a strong united nation but they each had their views on how to go about it.  This is their stories.  Their lives.  Entries from their journals.  This is the story of not Blood Versus Water.  But Blood and Water.  To whoever finds this, this is the true story of the second American Civil War. In the end, it destroyed one family.

This is the story of One Family. Two Sides. One War. It is a story of blood and water. Two journals, one the leader of the blue coats- the rebels- and the other the leader of the green coats- the politicians. And bits pieced together of their actions and of their stories. It will tell the story of how through blood is thicker than water- water can still wash away blood, and in the end, it isn't blood versus water, but blood and water and how the two can affect the way the world turns. So this story is shared in hopes we learn from Elle Ryann and Jensen Winters and their view of how America should be. So without further ado-

The lives and journals of President Jensen Winters and his First Lady Elle Ryann-Winters.

July 6th 2040
Journal~
I don’t know why I agreed to this all these years ago.  But my son asked that I keep a record of this war and maybe tell what caused it.  He said that three hundred years from now they can learn from our family’s pain.  And that may be correct.  There are two sides to this war and I feel soon it will all end.  I feel that after I copy everything I have written down in this journal the end will come.  So this first entry will be my last entry.  My son came to ask that I write it all in one large journal.  Who knows my second child’s thinking, I don’t and I raised him.  My eldest is like my father and I.  A soldier.  My youngest a princess and a dreamer.  And somehow the two is mixed and created my middle child.  A dreamer who has his feet on the ground.  I smile at the thought of my children, but the guilt eats at me.  They were raised more by my mother than me at times.  They were raised in a war.  I wonder if this is how Lincoln felt.  Or Jackson.  They were leaders in a Civil War with children.  Or Grant, he was the General.  I fight for them, of course, but I hate they grew up in a country torn by war.  But if you are reading this then I hope that the country is no longer divided.  Please learn from my mistakes and don’t divide the country again.  But then again maybe I and my side lost and you are reading this in hopes of learning from my mistake. If that is the case here is something I must tell you: No war is about Blood versus Water it is about Water washing away the Blood after all my own brother sided with my husband and fought against his own blood.  This war is hell.  All war is hell, but Civil War?  It is a special type of hell.  Brother versus Brother.  Brother versus Sister.  Sister versus Sister.  Son versus Father.  Daughter versus Father.  Son versus Mother.  Daughter versus Mother.  And worst of all, to at least me, Husband versus Wife.  I split my family apart for this war and my only hope is that I am the winner of this war but the final show down is coming.  I can feel it deep in my bones.  And I don’t think I will make it out of the final show down whole, let alone alive.  Because even if I live I know he won’t and that man for as horrible as this war is, for as horrible his actions have been… I love him…  He is my soul mate.  The love of my life.  The father of my children.  My husband.  But he chose to try to be the dictator of the United States.  He chose greed and power over myself and our children.  But I still love him.  But if need be to give my sons and daughter freedom, true freedom, I will kill him.  And that is my vow.  Freedom over love.  Blood and Water.  Blood over Water.  No matter the personal cost.
~Elle Ryann-Winters 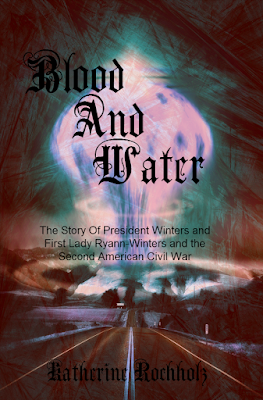