The supernatural war of 1775 stood beside the American Revolution hidden in the shadows. In the end the war would become the bloodiest ever seen in all the lands; but not a single magical being was able to take control. They separated. Each got their own set of lands. Each had the own laws. Never could another mate with a magical being outside of their species. And that is how all magicals grew up. Hidden within the mundane world taught to hate each other. That is how Tala Rollin grew up she grew up learning werewolves such as herself were better, and never, ever associated with magicals that were not werewolves. After all her father was on the high council of the wolves, why would she ever think different? Then she went to away to college, in her last year she ran into a man whose scent filled her with a desire to mark him as her mate. Arian Merrick. She finally thought her life was going to be complete. Then she discovers the unthinkable as they were dating. He was a Warlock! Arian Merrick, the man she wanted to make her mate was one of her mortal enemies! But isn’t love supposed to be worth fighting for? She gave her heart and soul to him from the first scent. How can she walk away from that? Their love will restart the wars. In the end will their love cost them their lives? Or will it finally be the first step into ending the bloodshed in their worlds? Will this be the turning point to ending the war of the magical beings? Discover Tala’s and Arian’s story in Forbidden. 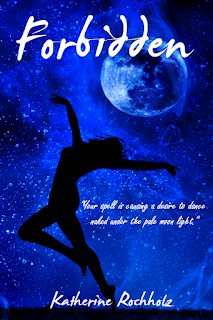 Posted by Katherine Rochholz at 1:19 PM