16 Years Ago Our Country Was Attacked. I remember the moment I found out. I had gone to to the Media Center in my high school, we were allowed to go see all the home rooms gingerbread houses we had made, something to bring the students closer together. I had looked up at TV as I knew CNN would be on. And there it was: A PLANE had hit one of the towers. The person sitting there thought it couldn't be real. As I was watching this news the second tower hit. I and the rest of the class that had gone down rushed back to our Spanish class to let the rest know what happened. We sat there in shock. We were told to turn it off at the end of first period. Many didn't listen. It filled the news. People panicked. There were lines going many, many blocks at the gas stations. The world had stopped turning for the US that morning. The fear that ran through the country was high. Would their city be next? Top Ten Lists of places that could be hit came out, would they be hit? What more damage was going to happen at the hands of the, then, unknown attackers. The country put their faith in their leaders and their military. And we declared war on terrorism. And we went after those that dare attacked our civilians. Looking back, it was a surreal time. But one thing is for sure, I will NEVER FORGET! 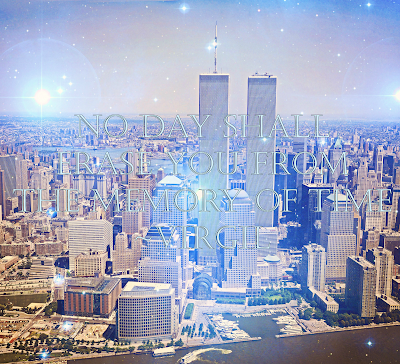