Oreic smiled out to the students once more.  “And last but not least Salvador’s School of Fine Magical Arts from South America with Headmaster Sebastian Torres!”
Everybody looked toward the doors and as they opened and the students marched to the front.  They were all dressed in finery that befitted their houses.  When they stopped at the front and lined up they all took a bow and then lifted their wands and in their element they all created the school emblem and motto: Magic is Art. Magic is Passion.  It was quite impressive.  Fire and Air making up Magic and Art, and Magic and Passion made up by Earth and Water and is, both of them, made up by Spirit.  And they flowed together in harmony.  That did take a feat of magic to create. Their headmaster then snapped his fingers and flames, lightening, dirt, visible wisps of wind, and waves all crashed into the letters and exploded them into the emblem of the pentagram with the school name Salvador’s School of Fine Magical Arts. The man held it for a moment before waving his wand to vanish the creation. The headmaster had this free living style, he kind of reminded people of a hippie, he had bell bottom black dress pants, with a white flowing shirt and a leather vest, his long hair in a ponytail. They took a bow and then took their seats.

The hall quieted once more and Oeric raised his hands. “Master Marcus Aurelius Marci f. Cornelius n. tribu Galeria Scipio Pius,” and wasn’t that name getting annoying, sometimes traditions seem to be created to annoy people. “We ask you to name the students chosen from Salvador’s School of Fine Magical Arts.” The hand did it’s now so amazing spin and flatten routine, and a ball of snow blue energy formed and called out the first name; ‘Lucas Sosa, Earth.’
The sixth year stood up and he was tall. He had sepia skin and his eyes were a reddish terra cotta color. He walked with confidence. This person knew his power and knew what he could do. The question was, would that be his downfall?
The next name was called before Katy could watch Lucas more, something about his magic made him stick out; and she wanted to know why.
‘Arthur Ramero, Air.’ The sixth year walked up and took his spot next to Lucas. Arthur chatted with him for a few seconds. Katy saw the white outline of power outline the yellowish color of his aura. It matched his dusty sand colored eyes that had a white pupil instead of black. His hair was also stark white but the tips that glazed his shoulders, those were a deep yellow color.
‘Mariana Flores, Spirit.’ Was the next name called and Katy looked to where the ninth year girl stood up from the ninth year table. Her skin was a golden tawny color and her hair was dark amber with sun kissed streaks. Her eyes through held the color of bluish purple lighting. Her power showed in her eyes, it was as if white diamond lightning bolts were shooting through them at a constant rate, much like high static heat lightning. She would go far, Katy was sure of it.
The next name was shot out of the hand. ‘Camila Ruiz, Fire.’ The seventh year girl stood up and stood out. Her hair was styled in a flame shaped beehive, quite eccentric, it started out at the bottom red and then going into oranges and then yellows and then lightest of blues, and the tip was white, much like a reversed flame. Her eyes were orchre color with more red in the undertones. She was proud of her element and wasn’t afraid to show it.
“She isn’t afraid to let her Fire Pride roar.” Katy chuckled.
Gaivan nodded. “Well, you went and got this rainbow hairdo. Though I am glad you didn’t cut it. You would look strange in short hair.”
“Yeah, I was going to but I have always had long hair. Maybe I should have done something like that.” She stated.
“No! I mean, the rainbow is cool, but that is a lot of bleaching and dying and it would ruin your hair. I heard mom talk about it.” Gaivan shrugged it off.
Katy gave him a look but turned back to the front, as Gaivan berated himself in his head. ‘Smart one Gaivan. Why don’t you just confess your feelings. You are only thirteen for goodness sakes.’
The next and last name for Salvador’s was called; ‘Rafael Herrera, Water.’  The eighth year boy stood up and moved to the front with the rest of his group. He wasn’t the type to pop out at you. But there was a silent danger from him. The type that came out from the shadows before you know what hit you. He was tall, muscled but not bulky, he had crew cut and his eyes were his defining feature, they were white. Pure white. There was not a speck of color in them, even from blood vessels. There was a flow of power crashing like waves around him. And suddenly Salvador’s team felt like the one to beat, even over Cleopatra’s.
Oeric smiled. “And there we have the team for Salvador’s School of Fine Magical Arts!” With that announcement Headmaster Sebastian Torres danced, and there was no other word for the way he moved, his team over to their table. 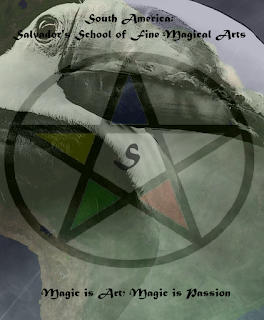 Posted by Katherine Rochholz at 3:10 PM