Copyright 2012 Katherine Rochholz
Published By E.A.R. Publishing Company
Waterloo, IA
Publisher’s Note
All rights reserved as permitted under the U.S. Copyright Act of 1976.  No portion of this book may be reproduced by any means, mechanical, electronic, or otherwise, without first obtaining the permission of the copyright holder.
This is a work of fiction.  Any similarity to persons living or dead (unless explicitly noted) is merely coincidental.
Cover by J.V.K.

God Our Savior…
wants men to be saved and
to come to a knowledge of the truth.
1 Timothy 2:3-4

This is for my Great-Grandmother:
Bridget Agnes Campbell
You were taken home before I got to have my memories but sometimes when the time is just so or a smell hits my nose…
I can sense you…
I think of you.

Prologue
“We are gathered here to celebrate the life of Daniella Alexandra Cosette…”  The priest spoke with a deep sadness.
He stood at the back and watched as the family grieved for the lost life.  He had walked up and looked upon the face of the girl that was to save the world.  He was skeptical.  She looked too young.  Too perfect.  Then again she was no ordinary former mortal.  He wondered if he could convince her; as was his task.
He just stood and watched as people, who were about to thrown into hell itself, grieved for the person that might save them… or destroy them…
He turned and left the scene behind.  His time would come… He just hoped he could save her…

Dani had taken her sixteen year old pain in the ass sister shopping.  And was regretting it.  But thankfully she was dropping Rebecca off at home now.  She had a five hour drive back to her college campus and was not really looking forward to it in the dark.  It was well after midnight once she pulled into her family’s driveway.  “Malika, you have everything for school now?”
“Yep, thanks Dani!  I am glad I got to spend the day with you.  I hate that you go to college so far away.”
“Well, it is my last year there.”  Dani told her, as she put the car into park.
“Really?  I thought you were going to for your doctorate?”
“I have been in college since I was eleven, Malika.  I need a break.”  I told her.
“You are just turned nineteen!  You have all the time in the world for a break.”
“Maybe, but I have been out of place my whole life.  I want to travel a bit.  I have saved up a bit of money and am going to go abroad and take a few writing classes.  Have a holiday fling.  Something normal.”  She told her sister.  She knew Malika would run in and tell their mom and dad.  And she would spend hours fighting with them when they called.
“But your dream of becoming President!”
“Is being delayed by a year.  I have to be normal once.  I have a law degree; I have a Master’s degree.  How many nineteen year olds can say they have a J.D. and a master’s?  Not many!  I am smart yes, but I have to live too, I can’t just be a walking encyclopedia.”
“Whatever.  You have a safe drive I have to call my boyfriend.”  Malika said as she opened the car door.
Dani didn’t know why but she felt like she must get out as well.  “Malika…”  The words died on her lips as she saw a movement out of the corner of her eye.  She barely had time to run around the car before the group of people descended upon Malika as they tried to take her.  “GET OFF HER!”  Dani screamed.  She tried pulled them off Malika.
For a brief moment she was successful, Malika was able to get out of their grip.  “Run, Malika!  Inside! Now!”  Dani yelled as the group grabbed her and pulled her towards the center.
Malika hesitated for just a moment, but then ran to get their parents.  “MOM! DAD!”  But she was too late.  “MOM! DAD! HELP!”
Dani watched as her parents ran out the door.  Dani could not speak she had made it to the center.  There was a man above her, his eyes red as blood.  “Please…”  Dani begged.  “Please let me go.  I have everything to live for.
“No you have everything to die for, young one.  Life begins with death.  Well, true life, true freedom begins with death.”
“Please…”  Dani begged.  “Don’t…”
“Sorry, a life for a life.  But don’t worry; I think you shall be reborn.”  The being said as he flashed his fangs.
“Who are you?”
“I am your new master.”  He stated as he bit down upon her neck.
The brief moment of pain caused her to scream.  She could see her parents as they tried to get through the crowd.  But they couldn’t get through, as the man with the blood red eyes drained her of her life.  She started to become cold.  She felt her heart beat as it slowed down, and then the man pressed something lukewarm to her lips.  It had a metallic smell.  Blood!  He was forcing blood down her throat.
“Drink it my dear.”  The being stated to her.  “Drink it and you shall be forever mine.
Dani tried to struggle, but it was no use as the blood flowed down her throat and her heart stopped beating.  It was as if time stood still with the last beat of her heart.  She could see everything as it was, the world was dark and cold.  The beings ran and the being that had killed her dropped her lifeless body to the ground.  With her last breath she fell to the ground and the last thing she saw was her family screaming as they turned her over; tears ran down their cheeks and fell upon her lifeless corpse. 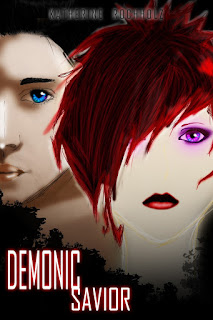 Posted by Katherine Rochholz at 6:06 PM