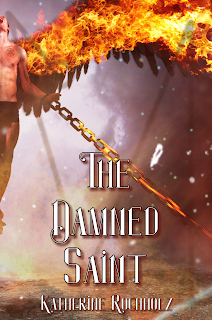 Raziel hoped it never came to it, it would tear at Vapula’s soul way too much, but sitting here while Vapula is being healed, he knew he would rage a war on Hell for him. He would FALL for him. Because even the purest of Angels couldn’t go through Hell, or what he has been through on Earth, and come out anything but burnt.

Even the sainted soul that had been damned had become burnt by Hell and Humanity, she was darker, more closed off, colder (but towards Vapula and Botis, and wasn’t that a weird relationship?

He had remembered when Vapula stated he had married them back in the seventh century after the birth of Jesus), and bore the mark of the Damned. No, not Cain’s Mark, but something other, something that put her on both Hell’s and Heaven’s do not touch list.

She wasn’t Angelic, she wasn’t Demonic, she truly was of Earth and both. She went to Hell pure and came back a little less than what she was before. Oh, she still was a Saint, the fact she just spent three hours using potions and spells of Earth to heal Vapula after he got into a fight with an angel for Raziel proved that, but…

She was a Fallen Saint, A Lapsed Saint. Much like Vapula was a Fallen Angel and Raziel was A Lapsed Angel. She was somewhere in the middle. And the middle was perfectly imperfect.
Posted by Katherine Rochholz at 1:44 PM