Ahh, look an excerpt, I am actually editing! Good Kati!
All Rights Reserved
The Damned Saint 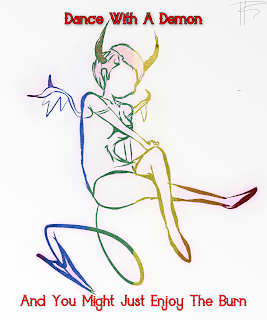 “Who came up with the saying ‘you dance with the devil and you get burned?” Gabriel asked Sophia and Botis as they sat at the poker table in Monte Carlo.
“Well that is a load of shite, I mean Luci sits on a throne of ice, and the bastard doesn’t dance. Didn’t in heaven and for sure won’t in hell.” Botis answered as he flicked his hand to change the cards to their favor.
Sophia slapped his shoulder, “play faire for once,” she hissed as she shook her head at the person sitting at the next table playing blackjack.
“Says the woman counting,” Botis mumbled. “It comes from a folklore, Gabby.” He turned and rolled his eyes as the whole lot of them were cheating one way or another.
“You going to tell me more there, Snek?”
“I have a name you over-hyped secretary!”
“Sure, you do, danger noodle!”
“Danger noodle! I will show you a danger noodle!” Botis puffed up and about hissed at Gabriel.
“Stop it you two, do not get kicked out of this casino, I will not free you from boredom until I am done. And I like this place. Seriously, every time you are in your male presenting form you pick a fight with Gabby.” Sophia rolled her eyes and leaned back, “tell the story, ole wise Snek!”
Gabby laughed as Botis sighed, seriously, what was he thinking cultivating friendship between the two of them. Seriously, it was the sex. Sophia got him hooked on sex with her. “Fine.”
Gabriel made a whipping noise but shut up when Sophia glared at her, she knew her friend’s temper.
“It is from a folklore, a girl wanted to dance at her communion even if her partner was the devil. It wasn’t Luci; but it was a demon, who burned the church to the ground after dancing with the girl. The demon then laid with her, yes, Gabby, like I ‘lay’ with Sophia, and tried to breed an army of Cambion. We destroyed them all with fire. God choose to drown the Nephilim, and Luci choose to burn them. Anyway, the mortals who lived used it as a tale of caution.” Botis shrugged as he threw an arm around Sophia, who knew the story as she was around when the event happened, who was one moment away from killing the deal who had started to flirt with Botis.
Gabriel smirked, “so you are saying Lucifer is still a giant lazy sod? And the saying should be dance with a Demon and you will get burned.”
Sophia snorted, "I have heard Vapula enough times on the subject. Speaking of that grumpy lion, wasn’t he supposed to be here with that Angel boy toy of his?” She smirked, "and the burn in quite enjoyable. Sophia laughed at Gabriel's choke and Botis looked way to smug.
Botis shrugged again, “he could have decided to go somewhere with his husband” emphasis on husband. “Only God knows how the two of them could have lasted this long.”
Gabriel snorted, “I am sure even SHE doesn’t know, and she made them soul mates.”
Sophia shrugged, “I get it. The balance each other. Raziel is laid back and good with holding secrets. Vapula, he is uptight, seriously lump of coal up his ass and two weeks you would have a diamond uptight, and wants to spread knowledge. They can reign each other in, give knowledge when needed and keep secrets when needed. Vapula can get Raziel to be serious, and Raziel can take that stick out of the ass of a grumpy lion.”
Posted by Katherine Rochholz at 4:43 PM