The Works Of Katherine Rochholz Available


Truth and Lies Past and Present
Katherine Lillian Fitz had only known one type of world. . . one of hard living on the streets. Then she finds out she is a witch. Now she is thrown into a new world, her world, and for once she thought life would be better. But she was wrong. A dark force is out to kill her, and she is shocked to her core when she finds out how important to her life this person is. Will she be able to come out the victor with her innocence intact or will she once and for all lose the young innocence she has even though she had lived on the cold hard streets of New York? Only time will tell. . .
Available Now!
Ebook: http://www.amazon.com/Truth-Lies-Past-Present-Katy-ebook/dp/B005RXVMO8
Paperback: http://www.amazon.com/Truth-Lies-Present-Katherine-Rochholz/dp/1105191990 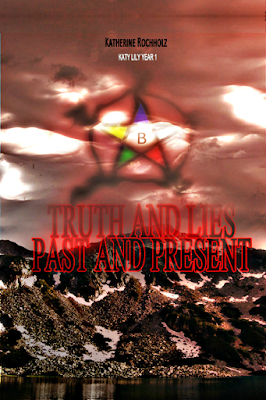 A Nightmare Within A Dream
Katherine Lillian Fitz has survived her first year in the the magical world. But a New Enemy has picked up the fight that Wesley Solomon lost. Raven Ebony seeks to destroy Katy just as her brother did, and she just might have her chance. As Katy lets her family know what really happened in the dungeon for death, Katy may have just lost the will to fight. But when it seems all hope is lost, and Darkness has spread, a small shimmer of light can be all she needs to do things she must do, to save those she loves with her heart, her life, her soul. Which may end up being the cost of this war.
Available Now!
Ebook: http://www.amazon.com/Nightmare-Within-Dream-Katy-Lily-ebook/dp/B007ZBFB0Q
Paperback: http://www.amazon.com/Nightmare-Within-Dream-Katherine-Rochholz/dp/1105789756 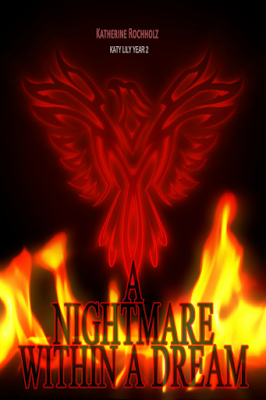 Hunted: A Katy Lily Series Companion
Antonio Cain MacCathmhaoil never intended to be come a professor like his father, but life has a way of changing one's plans.
After a tragic event he applied for and accepted a job at Bridgett's School for the Magical Arts.
There he met Sandra Porter and knew she was his soul mate.
She did not feel the same...
She ran.
Far...
But she was then captured by the Witch Hunters...
Then the hunters became the hunted.
Antonio vowed to bring her home.
But first he had to save her from those who hunted...
Available Now!
Ebook: http://www.amazon.com/Hunted-Katy-Lily-Katherine-Rochholz-ebook/dp/B00ASQ81WA
Paperback: http://www.amazon.com/Hunted-Katherine-Rochholz/dp/1329839072 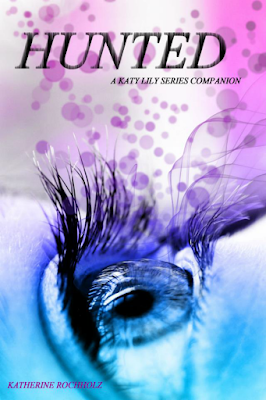 The Veil Lifts
Katherine Lillian Fitz: Goodness.
Are they one in the same? The magical world seems to be convinced. Katy holds onto a shadow of a doubt as it would mean the person she had once loved the most, the person who loved her as a child, the person who was once all she hand, the person that she mourned for five years, that her mother would be her greatest enemy...
But before she can deal with the White Being that still tempts her, before dealing with her mother who may or may not be alive, she has to deal with a much more serious situation... Not only has her Aunt Aaliyah broken out from Ghastly, the main Witch's Prison and Katy Lily determined to find a way to prove her innocence no matter the cost...
But Katy has a growing Darkness inside of her... A Darkness that threatens to overwhelm and consume her and worst of all... two people blood related are encouraging her to harness this Darkness and use it... What will happen? Will Katy Lily find her way from the Darkness back into the light or when The Veil Lifts will all be forever lost?
Available Now!
Ebook: http://www.amazon.com/Veil-Lifts-Katy-Lily-Year-ebook/dp/B01A300SRQ
Paperback: http://www.amazon.com/Veil-Lifts-Katherine-Rochholz/dp/1329803256 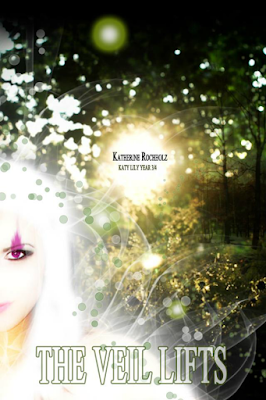 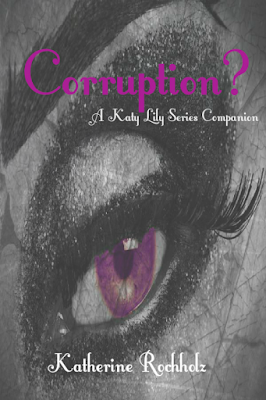 The Katy Lily Series: The Beginning
Discover The Katy Lily Series By Author Katherine Rochholz. This Box Set includes the first three books of The Katy Lily Series, Truth and Lies Past and Present, A Nightmare Within A Dream, and The Veil Lifts. It also includes bonus Novelette Corruption? Journey with Katy Lily through her world. Discover the Darkness within the Light. And the Light within the Darkness.
Available Now
EBOOK: www.amazon.com/Katy-Lily-Beginning-Katherine-Rochholz-ebook/dp/B01BWYWH12
Paperback: http://www.lulu.com/shop/katherine-rochholz/the-katy-lily-series-the-beginning/paperback/product-22576026.html 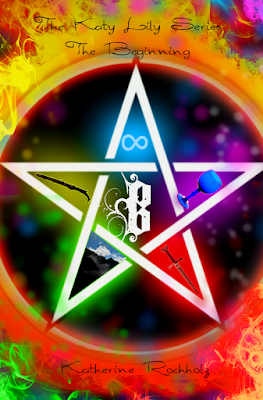 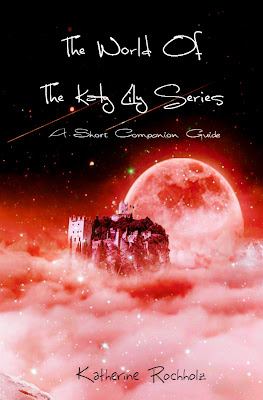 The Keepers And The Sisters Of Lilith

There used to be nine of THEM. The Nine Beings of Magic. They created the world as a gift to their father. There were four brothers who were all that was good and wholesome in creation. Then there four brothers that were all that was dark and evil in the world. For without good there is no evil and without evil there is no good. And they needed balance. So the eldest child and the only daughter of the great being was the balance. Soon the brothers all started losing faith in their father’s love as well as their faith that humanity could ever be truly balanced. One by one the brothers gave their magic to their sister and left for ever. They would never exist again. The sister took that burden as for her to die or leave would kill the Earth and the mortals she so dearly loved. So she created the ley lines to give the world magic. But the world was to never have this magic, so she started to drain the ley lines just enough and put the magic into items of grand importance. Excalibur, The Crowned Jewels, The Great Scepter of Nefertiti, amongst many others. There were those who abused the items and thus she created The Keepers to protect them. She created Protectors to protect the Keepers, and she created Guides to guide the Keepers. And The world for a while was in harmony… 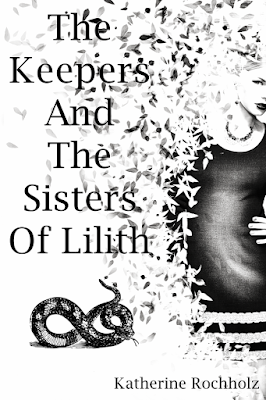 For The Guardians Of Earth Time Shall Stand Still
Kari, Catherine Von Kampen, born October 31st 1472. Her life revolved around her younger brothers. Her life was destroyed by a demon on May 1st, 1490. She became a Hunter. She was killed during her mission to seek revenge on November 16th 1492. The Death Fairy gave her the choice to become a Guardian. She took the opportunity presented to continue on her path for revenge. Flash forward to the year 2012. Kari was happy with status quo; she had her soul mate, James Colt, and his two sons at her side. However now she has opened a door to hell releasing The Seven Deadly Sins from their cages in hell. Now she must not only battle the deadlies to send them back to their place in hell; she must fight a growing attraction to The Morning Star. Will the hunt for The Seven Deadlies destroy her chance at redeeming her soul? Or is Lucifer right? That she is destined to become the Mistress of Hell? Join her on her journey to Hell and back. . .
EBook: https://www.amazon.com/Seven-Deadlies-Guardians-Life-Book-ebook/dp/B00A1WYII2
Paperback: https://www.amazon.com/Guardians-Life-Seven-Deadlies/dp/1300269278 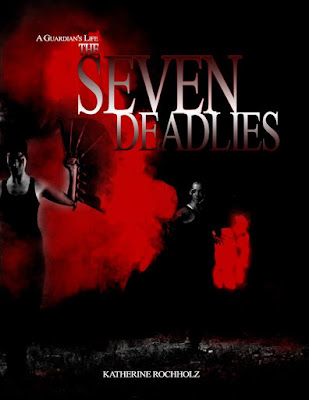 “I watch the monsters day in and day out. They never notice me the lowly human. But I watch them. I know them. I know their weaknesses, their strengths, their desires. They don't think anybody could ever figure it out. Ha! One only has to watch and listen to see what is really going on. Of course, nobody watches. And nobody pays attention to the dying girl. The girl that is quiet and mousey, the girl that doesn’t say two words unless she is in class or spoken too. No nobody notices the dying girl. And because of that I can watch them. Study the monsters. And learn how to kill them. I don't have the strength to kill them. To get rid of the evil that plagues this town. But I hope that someday that humanity won't be lost to them. I hope that someday that someone will have the strength to take them down. But I watch. That is all I can do. Watch and record. And now I want to share this all with you. Share with you how I came to find out how things go bump in the night. And the stories of Monster University."
Ebook: https://www.amazon.com/Monster-University-Set-Short-Stories-ebook/dp/B01M3VWLR7 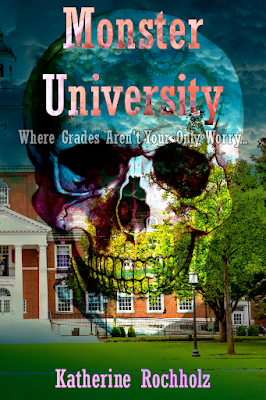