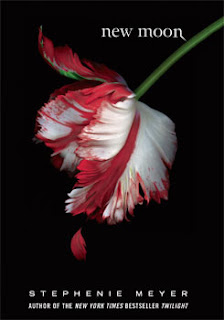 For Bella Swan, there's only one thing more important to life itself: Edward Cullen. But being in love with a vampire is even more dangerous than Bella could ever have imagined. Edward has already rescued Bella from the clutches of one evil vampire, but now, as their daring relationship threatens all that is near and dear to them, they realize their troubles may just be beginning. . .

Okay so I said I wasn't going to do this but I am going though these books really fast, and yes I am giving spoilers... bad Kati, but it is what it is. Okay New Moon Grade 2 and half stars. Why? I like Alice forget the whole sparkly vampire thing Alice is funny again sparkly vampire thing not good, but forgivable this time because of Alice, the werewolves not too far off from many many Native American legends, did some research even the 2 tribes, my ancestors come from had stories similar to the werewolves in this book so I am okay with it,(they should be called just wolves, or shape shifters, but again I can go with werewolf as it means wolf man) but the sparkly vampires can't find them, found something like them except the sparkle aspect more like sun drains them of their energy so still vampires are not completely forgiven, only Alice is.  Alice can sparkly like diamonds all she wants, I like Alice. But this had an okay plot, I was getting bored with Bella trying to hurt herself but then Alice saves the day with a untrue vision YAY!!! Action in the book, at this point Edward thinks Belle has passed on and wants to die and goes to the royal vampires (many myths have them so okay and many myths have them with powers as well so OK) but still issues with the sparkle thing and come on Belle really you have Jacob being all nice and waiting and you forgive Edward like he did nothing wrong really make him work for it.  You are destroying women's movement everywhere I turn in this book, if it wasn't for Roslie and Alice I would have to wonder about the author's view on women. I like that there is not much with the sparkle going on with this book maybe Eclipse will have a forgivable note but not anticipating it so... we shall see
Posted by Katherine Rochholz at 6:51 PM