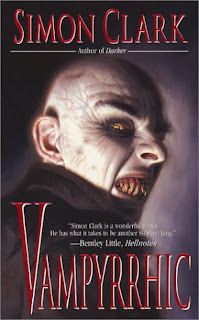 Blurb: Leppington is a small town, quiet and unassuming.  Yet beneath its streets terrifying creatures stir.  Driven by an ancient need, united in their burning hunger, they share an unending craving.  They are vampires.  They lurk in the dark, in tunnels and sewers... but they come out to feed.  For untold years they have remained hidden, seen only by their unfortunate victims.  Now the truth of their vile existence is about to be revealed- but will anyone believe it?  And is it already too late?


Throw in some horrible blood sucking savage vampires and a bit of Norse mythology and you've got a book that will entertain you, at times.  I do have to say that Clark's writing style sometimes did get on my nerves, especially the poor use of metaphors but overall he keeps good level of suspense going (when the action starts) and does well with some graphic, terrifying imagery.  However that being said, there is a lot of detours that really were not needed, and he does put a lot into this book, there is a lot of elements from horror staples kind of thrown in, without being totally coherent about it.  As well as he uses the same descriptors over and over again (example- "as white as a football" (soccer ball peeps) or "as sharp as a panther's" for the use of how white the head of a vampire or how sharp their teeth were).  There are only so many times that can be done in a book before the reader wants to buy him a book on metaphors or bang their head on a wall,and he over does it, and he repeats some of the same scenes as well.   There is a twist on the vampire legend that remains true to vampire tradition, not an easy thing to do, but twists are needed to help the story along.  There are a lot of graphic sex scenes as well, I am still not 100% convinced they were needed.  The other thing that bothered me was that Clark focused a great deal on a character early in the book, and she never made an appearance.  I understand she was a motivating force for the main character, but spending that much time on explaining the character was not needed if she was not going to be in the storyline.  Clark over-repeats his themes, and it does take a while for the story to start moving so to say, once it does the action is good paced, but does take a long time in the beginning of the book.  And the last thing is the editing is poor.  It had a good idea, and parts of the story that were good, but the editing of this book caused the quality of this book to go down hill.  I would still say give it a try if you like horror, but don't expect to much from it.   There is a squeal but I have not had a chance to read that one.

Posted by Katherine Rochholz at 3:13 PM