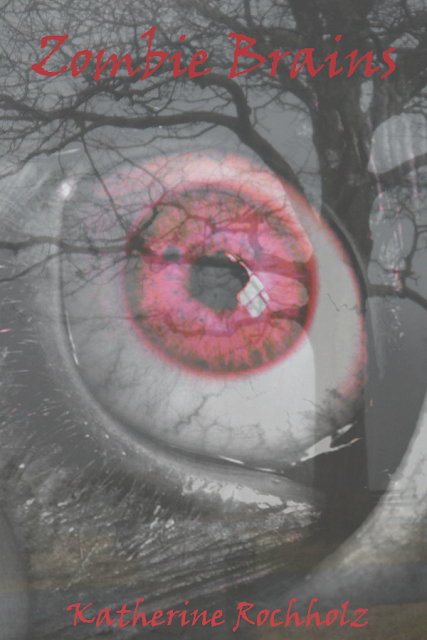 Zombie Brains
Katherine Rochholz
“But mom, I want to eat my candy!”  Suzie, my five year old, cried at me.
“I have to check the candy first my lovely little witch.”  I told her as I dumped her Halloween candy in the middle of my table.
“Mom, can’t we have one piece?”  My twelve year old, Greg, asked.
I sighed.  “Pick one piece and I will check it.”
“This one!”  Suzie said; she held up a very large lollipop.
I sighed she would be bouncing up and down the walls all night; just what I needed.   I quickly checked the lollipop; I figured at the very least it would keep her quiet for hours.  “Here, Suzie, go put your cartoon in and stay in my sight.”  I said and handed her back the candy.  “Greg?”
“Can I have the liquid candy?”  He asked; he handed me what looked like a blood bag.
“I suppose.”  I said.  I took the bag and checked it for holes or nicks.  “Here” I said; I handed him back his candy.  “Finish your homework and keep an eye on Suzie.”
“Yes, mom!”  Greg went into the living room and pulled out his math book.
I sat down and started to sort the candy, we lived in a good neighborhood, but since my husband was killed in the line of duty three years ago I was a bit more protective than I once was.  I threw away some candy called “Zombie Brains.”  It was a goo candy, but it looked tampered with and there was no way I would let my children ever eat something that even hinted at being tampered with.
After a couple of hours, Suzie fell asleep in front of the T.V. and Greg was dozing next to her.  I piled their candies in their bags and marked them and put them up.  I put them to bed and sat down to work.  I worked from home doing something I never thought I would, but it paid the bills and allowed me to make ends meet now that my husband was gone.  “Hello, this is Natasha.”  I said as the phone beeped in my ear.  I don’t know how I came up with my phone name, but Judith just didn’t sound like a phone sex agent’s name.
I went to wake my children at eight the next morning.  I would sleep while they were at school.  I am glad I stopped to get the paper first.  I opened the door, this child stood in front of my door.  At first I thought the child was just wearing their Halloween costume, until they charged at me.  I didn’t think, I just slammed the door in its face.  I went and checked all doors, and the three windows in our house.
“Mom.”  Greg was up.  “What’s going on?  I heard a crash?”
“Nothing, go back to bed sweetie, they canceled school.”
“Why?”
“Because you are going to spend the day with your mom.”  I tried to smile.  It must have fooled him.
“Okay.”  He said with a yawn and went back to bed.
I was suddenly very happy there were not windows in the bedrooms.  I turned on news, and was shocked.

“This is just in!  A madman is claiming he created the zombies, he poisoned a candy called “Zombie Brains” and then proceeded to give it out to the children in his neighborhood.  We have footage of the neighborhood.  Just stay inside and lock your doors.  Bullets to the head do seem to work, if one gets in.” The news anchor reported.
The camera shot to what I knew to be footage of our neighborhood.  I am so glad I disposed of that candy last night.  There was a young child in the middle of the world.  It looked to be Suzie’s friend, Janey.  She had half her jaw ripped off and her eye hanging out, she was dragging her broken foot and she moved down the middle of the street.  Then I saw Maggie, Janey’s mom.
“Janey!”  Maggie ran to her; she stopped and looked at her child.  “NO!”
Janey charged at her mother, with a speed I never thought of when it came to zombies.  Soon Janey had her mother on the ground and she had bitten into her neck, she left a gaping hole.
I didn’t want to watch.  But I could not turn away as she ripped into her mother’s body and started to eat the organs.  I was going to be sick.  I barely made it to the toilet before I lost last night’s dinner.

I went to my bedroom and opened up the safe I swore that as long as I lived I would never open, my husband’s gun safe.   Then I woke up the kids.  “Babies, get dressed.”
I moved quickly packing food and water.  I packed all the bullets and the handguns.  Greg and Suzie were at the kitchen table eating their cereal.  “Greggy, you remember when dad taught you to shoot?”
“Yeah why?”
“Baby, look there has been an outbreak.  Zombies.”  I said and flipped on the news, I prayed that it no longer showed Janey.
“Whatever mom.”  Greg said but looked toward the T.V.; thankfully it was the news anchor.
“The virus seems to be spreading rapidly.  It has spread to the whole town.  At nine o’ clock this evening the county will be bombed, and the zombies destroyed.  If you are a living citizen, without any bite marks, or bleeding eyes you have until eight fifty-nine tonight to get out of the county.  This concludes the news.”  The screen went fuzzy.
“We got to go kids.  Stay here while I get the car; do not open the door.”  I left the house; quickly I closed the door behind me.  I keep an eye out for the zombies.  Most of them kids.  I got to the car; I saw one, it on the hood and munched on what looked like a string of intestines.  I raised my rifle, took aim and fired.  The head exploded.  I ran to the car, unlocked it and jumped inside, just as a group of zombies descended upon me.
I turned on the car, backed up quickly and then moved forward and ran over the zombies.  I kept backing up and driving forward until they are all nothing but splotches of blood on my driveway.  I drove the car up to the door; I climbed over the driver seat and pulled open my house door and grabbed my children.

I threw them in the back seat and slammed the door.  I got back into the driver seat and took off; as I ran over a dozen or so more of the miniature zombies.  Mentally I had started to call them mini zombies, rather than acknowledging that they are children.
I just drove; but about three miles from the county boarder and only an hour to go, the car died.  I wanted to cry.  I looked at my babies in the back seat.  Fear in their eyes, their faith in me to make sure they lived.

“Babies, we are going to have to run for it.  I want you to stay next to me.”  I got out of the car did a sweep of the area; there were so many abandoned cars, which can only mean the zombies are around.  “I want you to take this gun Greggy, and stay in front of your sister; I will stay behind, you both.  We have to move quickly.”
“Mommy, I am scared!”  Suzie cried.
I knelt down.  “Suzie Q, I know.  I am scared as well, but we have to make it out of the county sweetie.  Stay behind your brother and don’t look back.”
“Mom…”
“Greggy, it will all be okay.  Let’s go.”

For most of the trip nothing eventful happened and we could see the blockade.  We had fifteen minutes to make it to the blockade, and then they attacked.
There were hundreds of them, and they all ran towards my babies.  I fired; I didn’t care where I hit.  I did what I could, but I knew that we could never beat them.  I tried; I needed to save my children, I tried to clear a path.  But I couldn’t.  They were able to divide us.  I could barely move; my soul died as I saw my Suzie Q bitten, and another group took my son from me, as they ripped him apart in front of me.  I was surrounded.  I had used all my ammo except for one bullet.  I looked at the thing that was once my Suzie Q, now a brain hungry zombie, an undead creature…  I took aim as I heard the planes over head, and I shot… I killed the zombie that was once my child.  I heard nothing, as the first bombs hit.  My last thought was it was strange that I barely felt the heat, as I headed into the darkness that promised a peaceful, painless oblivion…

Posted by Katherine Rochholz at 10:14 AM