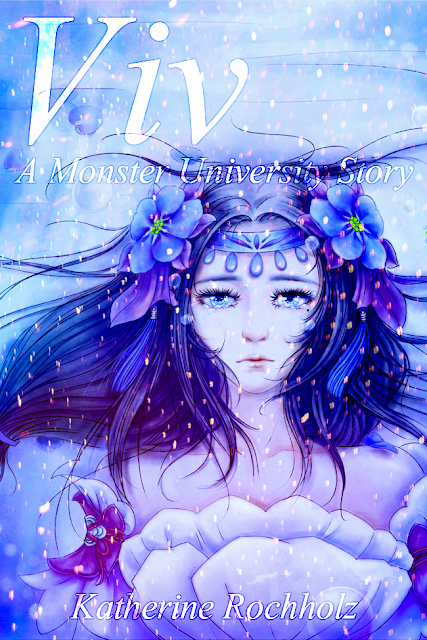 “Long ago I made a choice. But isn’t that how every story starts? A choice. A good choice. A bad choice? But it all starts with one choice. One moment of time. They say if you continue to look back to the past, ignore the present, you will never make it to the dawn of the future. Is that true? No. Well, not for me. I am immortal. A being. A water spirit that made a choice that changed the course of my existence. My choice? I gave Arthur his sword. I raised his right hand man, Lancelot ,giving Lancelot a ring to be immune to all magic. After all, I loved Lancelot as a son. I did raise him. I even gave Merlin his magic! But then the boy I raised betrayed my chosen warrior. My chosen king. When that happened my soul started to die. It turned dark. So now instead of just helping those that should make this world better, I will answer the requests of almost all. I make a deal now for their soul. They betray one person; even if it is a minor betrayal such as a lie, I gain their soul. After all I need the magic of souls to allow me to live outside of the lake being a water spirit. It used to be I could feed off a dozen souls a day, but people forget to ask the Lady in the Lake for a favor now. But there are still few and most of the time I now spend with other ‘Monsters’, after all they are my new family…”

Viv yawned as she waited for the order to come up. She worked with Morgan in the restaurant. It was convenient. She could leave if she got a request and it took care of her new family. She rolled her eyes as Cameron flirted with the mortal waitress that had their table tonight. She just kept an eye on the place and did the books normally but today three of their waitresses didn’t come in. One she knew about, that was the no call no show, and that is because Tony was taking care of Drake’s dinner leftovers. God, when did she become so blasé about death and murder? She used to be a being of the light! Goodness personified! And now she drains souls to live. She knew when she became a monster, but when did that blasé attitude happen? It must have sneaked up on her. She grabbed the plates as they came up and went and dropped them off at the table. She stopped by the boys' table. "Boys."

"How are you doing Frankie?"

"Good. Mother is very excited about the new Frankenstein."

"That is good. Very good. I am so happy for you. I am sure you will raise the child right." The sadness in Viv's voice couldn't be hidden.

"Miss Viv, you aren't still blaming yourself for Lancelot are you?" Carmeron turned from the waitress.

"I raised him. I must have done something wrong. I mean I ended up having to take that ring back and allowing him to be killed. He betrayed my warrior and king."

"Wasn't on you Miss Viv. Sometimes mortals are just rotten to the core. I mean sure we kill people sometimes, but we all have our reasons and we try to kill the guilty." Lucas stated. "Now put that out of your mind and go on. I know Morgan is busy because three didn't come in today."

Viv patted the boys on the cheeks and went into the back. "Hey Morgan, did you find any new waitresses or waiters?"

"Yeah! They start tomorrow." Morgan stated looking up from the books. "I am going to go spend some time with Gus as well. He said he wanted to try something, I think he went back to our old research."

Viv smiled. She wished she could answer monsters' requests. She would have given Morgan her baby. But she was forbidden from answering the request of a monster. "You two will get it. I know you will."

Viv got a call then. "I got a call. I will be back." She touched her finger to the sink of water and turned into a water spirit and moved through the pipes and into the natural water source and back to her lake. She used her magic to change herself into a blue flowing gown. "Mortal, you request an audience with the Lady of the Lake?" She made her voice sound eternal and honey dipped.

"Dear Lady of The Lake, please. I need the power to help my brother become the ruler of my country. Please. There are many corrupt people in control. I need to fight them. I need to bring power back to the people. My brother has so many plans. He would be a grand ruler and I am a grand warrior." The man was down on his knees. Begging. "You know the rules. You betray anybody, even a little lie, your soul becomes mine and you will die?"

"I understand my lady of the lake. I understand totally. I swear you will not be disappointed in me." The man stated.

"What is your name?"

Viv tensed. She wanted to cry. Lance. Lancelot. She swallowed hard. She could deny him. She could send him on his way. Or she could try to give the name redemption. She could see if this man broke her heart like her own Lancelot did. She looked at the young man. She nodded. "I shall grant you your wish, though there will still be some work involved, I shall ease the way. Remember the punishment if you betray your people." She placed a hand on his head and let her water wash over him filling him with her magic. She granted him the power to gain his wish. She looked at him one last time and disappeared back into the water. She prayed she wouldn't have to take this young man's soul. She hoped that she wouldn't be torn in two by another Lance. She went back to Morgan's office and sat there for a while getting her emotions under control. She looked up to see Morgan watching her.

"You give the person their wish? Why are you so upset?"

"Yeah, his name was Lance, and his wish was to help his brother take power."

"Maybe this one won't betray the magic you gave him. You never know. Have hope Viv." Morgan squeezed her shoulder. "Go home and get some rest."

"Thanks Morgan." She tried to give a smile. She cleared her throat. "I will try. See you tomorrow." Viv grabbed her jacket and keys and took off.

One day she was doing the books when a blackness overcame her soul. One of her people had reneged on their vow to never betray anybody. To never even lie. She followed the strand and was standing in front of Lance. She had changed into her Lady of the Lake outfit of flowing blue dress. "Lance?"

Lance looked up from where the sword was buried in his best friend's and brother's chest. "He... He wasn't going to share the power like he promised. He lied to me." He tried to lie.

Lance sneered at her. "I should have been in power. I gave everything, even my soul for this!" He tried to run at her with his sword. His sword entering her stomach. But she was a water spirit and it went right through. He looked at her with wide eyes.

Viv had tears in her eyes as she grabbed him by the throat and looked into his eyes. She drained him of his soul. The blackness of his soul entered her body. The mist of the soul mingling with the mist of her very being. Giving her life and power to do as she wished for more time on the mortal realm. Allowing her to leave her lake whenever she wished too. She let go once the soul was fully absorbed. The body fell to the ground and she looked down at it. Tears in her eyes but she refused to let them fall. She moved back towards her new town; but instead of going back to Morgan's she went to her house and grabbed a photo and then moved back to her lake. She sat in the center of her lake, under it, allowing the water and the fish to flow through her. She had a magical protection around the picture, which was more a drawing than a photo, no matter how much digital technology was advanced. She looked at the image, it was of a young Arthur and Lancelot and her. The boys were wrapped around her and they had huge happy smiles. Excalibur upon Arthur's waist and the ring that canceled all magic lay upon Lancelot's finger. The drawing was done two days before Lancelot killed Arthur. Viv looked at the photo and waved her hand showing the images of all the souls she had taken and absorbed. She looked at them all, especially the newest Lance, and she finally let the tears fall and fill her lake with salt water...