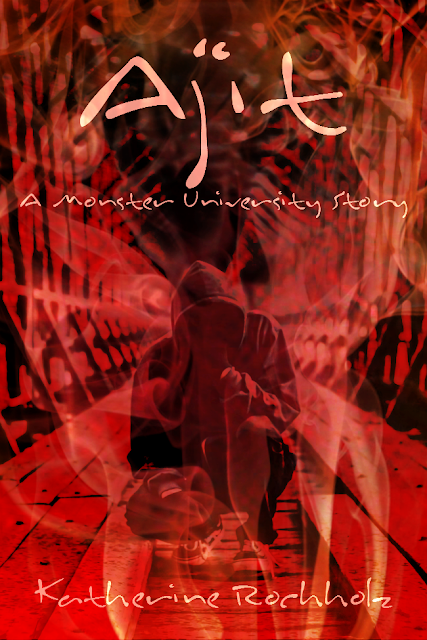 “All those years ago I almost gave my life for the children. Then the village repaid me by killing me. Now I must sew my head on every morning. Now I have to live for eternity. Mostly because I demanded my revenge. I mean I almost die for the children as they were stolen from some humans to be used in some ritual? And then they turn around and call me a witch for being able to save the children? They behead me? They kill me? Of course I demanded my revenge! Okay now I admit I was what was called a gun for hire back when I was alive. Yes, I killed people for trade. Everybody had to make a living somehow and I chose that route. I also stole and cheated and killed for the hell of it. But never children! I mean come on where is the fun in going after someone weaker than you? No challenge at all! And well, kids are innocent and full of love and life. I could never kill a child. Now I have to live with this curse, eh it’s not so bad. I don’t mind it so much. I get to live history and see all the advancements made. I have learned many languages, lived many lives, and lived many places. I mean yeah I have to sew my head back on daily; and once a year I have to make someone pay for their crimes. But children are my only weakness. After all I was a known murderer back in my years of my living life. And Halloween, the start of a new year, is now upon us once more. Time for my fun!”

Ajit moved from his math class. He hadn’t been paying attention. Like that professor could teach him anything at all. He hated when Bo suggested they do school again. But Bo has made this undead life easier. He moved towards the restroom. He looked at his neck in the mirror. Every bloody morning he had to sew it on or have sewed on. Frank even tried superglue once, staples, and host of other things, even industrial grade epoxy. But every morning his head would be sitting on his desk and he had to stumble over and pick it up and sew it on; after that he had to airbrush it with make-up to look like a tattoo or to hide it. Depending on his mood and the mask he created for that year. Right now he decided to go with the tattoo. He was the bad boy whose ambition was to become a police officer and was majoring in Criminal Justice. He frowned at that thought again. Damn Ewan for winning the battle to be the police detective in this town. Seriously Ajit was sure the bastard cheated but couldn’t prove it. He yawned as he slipped into his introduction to forensics class. This one wasn’t so bad but he knew all this. He was in fact a forensic scientist before this last up and move. They didn’t really age, except with some finely placed make-up or spells (he really hated spells they made he furious after all he wasn’t a witch and got beheaded because of the fear of witchcraft), so they moved a lot. Every twenty years or so. He sat down in the back and just tried to stay awake.

Ajit went and met Ewan after school. He called them ride-a-longs but really they were going over ways to keep people from finding about the monsters. Ewan may be a cheating bastard when it came to picking who would get what lot in the move, but he and Ajit were a lot alike. Ajit would even hazard a guess that if he had lived in Scotland when Ewan was around they would have been warriors together. But Ajit hadn't. He had been born elsewhere and had been a gun for hire. However both had similar lots in life and they 'bonded' over that, and really Ewan was an easy guy to get along with... when he wasn't cheating.

"You are still trying to figure out a way to say I cheated?" Ewan asked as he gave him a few forms of paperwork to help him forge."

"You did cheat. I just have to figure out how you did it!" Ajit stated as he started going over the paperwork and figuring out how he had to forge it. One thing about being a monster was it give you time to really learn some skills. Most monsters figured out how to force a talent in art and forgery. After all it came in handy when they had to make new papers up.

"Like you didn't try and cheat? You pulled your head off and threw it across the finish line of one of the races!"

"Yeah so what? You put your head on your whip and chucked it over the wall!"

"Okay so the two of us in an obstacle course is who can cheat with their head the most times."

"We should have just drown sticks like the docs of the group did. But no us blue color types had to come up with The Undead Olympic Games."

Ewan laughed. "Yeah well they shouldn't have allowed us all to get drunk and pick how we were going to decided who did what when we moved."

"And we still haven't changed the way we do it in centuries."

Ajit chuckled and went back to the paperwork he was doing. After all it was quite important. With Halloween upon them there was always more work to do. It is like the Monster New Year to be honest. Parties, murder, death, mayhem and destruction. Par for the course actually to be honest. Some like to spread their rituals out, others have to do it on certain days, but those with a choice tend to do it around Halloween. Probably because the veil is the thinnest on Halloween, the Witches' New Year, the day the dead walk the planes again visiting family and friends; there is a lot of power and magic in the air during Halloween. No matter how much Ajit hated magic, he could never deny that Halloween even the mundane humans could taste and have their own rituals on that day. Even if he had seen it become commercialized with candy and trick or treating. It still had that taste and essence with the Jack O' Lanterns, and the monster costumes to scare of the evil spirits. Never actually worked, though once upon a time if the pumpkins had been spelled right they could trap a harmful spirit until the pumpkin rotted and released it back to hell. Yeah, Halloween was power, and that is why he had to kill an evil being upon that day to keep his immortality and not join the evil beings in hell.

Ajit left the station to go home to an empty house. He sighed. Sometimes he envied those who had people in their lives. He had chosen to live alone but sometimes he envied people like Sam and Bleu who found someone to share their lives with. He knew that he wasn't the best of person to live with, but sometimes it was a lonely existence. He shook his head. Halloween season was here and he had to choose when he was going to take his victim. He had to find his victim. He had a few ideas. There was a couple boys in town that got away with assaulting a couple of girls in town. Well, the court systems gave them slaps on the wrist and let them chill in the country club prison for a couple of months before releasing them and letting them come back to the school. After all they were young and why should one mistake ruin their lives. Ajit snorted. Men who hurt women were some of the lowest in his opinion. Those who hurt kids being the only scum lower. Ajit looked at the schedules he had made of the two 'men' that he was going to go after this season. He saw they both were to be at a party a couple of days from now. That would work. He smirked. Well, there his victims and his plans.

A couple of nights later Ajit was standing at the same party as his victims. He moved over toward where the two of them were trying to chat up some girls. "This party really kinda blows. I know a party were the girls are much easier. And it isn't far from here."

The two boys looked at him. "Really? Lead the way!" They exclaimed and jumped up basically spilling their beer over their shirts.

Ajit gave a spooky smile. "Follow me boys." He laughed as he moved through the party goers. He got into his mustang. He always had to have a steed, even if it was in the form of a metal steed. He used to chance his victims, and still sometimes does, but most of the time now he can get them to follow him. After all find their weakness, find their vice, and expolit it. That is the way of living this undead life. Soon he had them lead into the woods.

"Man where are all the girls at?" One of them asked.

"Yeah, you promised girls!" The other yelled.

Ajit moved and ripped his head off and then turned to them. "For your crimes against humanity, you are now to be punished!"

The boys screamed and tried to run but Ajit was right behind them with his sword in his hand. After all Ajit had been doing this for centuries. He got up behind one and swung and the boy's head hit a tree with a sickening thud as his body ran a few more steps before falling to the ground. The other boy screamed and tried to run faster. He made it to the road were the cars were. He got into the car and took off.

Ajit laughed as he got into his steed, his head was sitting on the dash, and went after him. His car was faster and soon he was upon the other boy and he threw his sword just right through the windshield and the boy's head was disconnected from his body as he crashed his car into a bank of trees. Ajit stopped his car, picked up his head and got out and went to the other car and pulled his sword out of the seat, he smirked at the boy's head that lay on the ground in the passenger seat. "Justice has been served." He stated as he walked back and got into his car, he did a quick sew on of his head so he could drive home. He knew Ewan would clean up the mess, but hey, they all helped Ewan many of times before and this time he was the detective after all. His job was to clean up their messes. Ajit laughed outloud as he pulled into his drive and dialed Ewan's number on his cell. "That is what you get for cheating old boy." He stated and then hung up as he locked his door and fell across his bed and let the feeling of satisfaction lead him into a deep sleep.