There is an old superstition that floats around the lands: When there is a ring around the moon something wicked this way comes. Upon the night that Doyle Azrael Sullivan was born the ring was blood red and so pronounced the science community would talk about it for years after the fact. It would even be brought up in a trail of a century almost sixty years later. For upon that night the media would claim a demon from hell was born, after all he shared a name with the falling angel of destruction, though the name meant ‘help from God’ once upon a time.
But that would be far into the future; for now Doyle is just starting out upon his path in life, never knowing exactly how he will live up to his name: Dark Angel Of Destruction, a name that would be a title of a book far into the future.
For now upon that cold October night in 1962, shivers went down the backs doctors and nurses, that had nothing to do with the weather, when they looked upon the silent newborn that had been born with a tuff of black hair and amber eyes, the copper color around the pupil as red as the ring around the moon that night. A shiver that was a forewarning of the red that would flow in his wake. 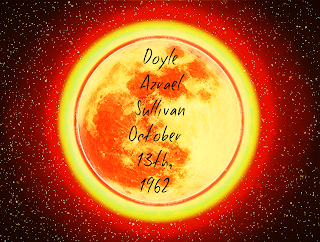 Posted by Katherine Rochholz at 1:14 PM