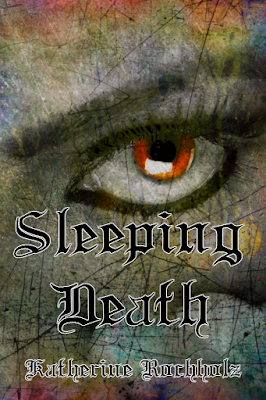 Once upon at time there was a vain Queen and King, they had a child who was as pretty as can be. They hired three witches to bless the child with beauty, grace and pose.

But there was a fourth witch that was not invited. She came to the christening and gave this proclamation. “This beauty, Briar Rose, shall have her beauty, grace and pose, as long as her heart beats within her chest. The moment her heart stops beating, she will lose all three. Her body however shall never die!” The witch then bent and kissed the sleeping beauty on the head.

She turned on her heel and disappeared from the castle, she left to ponder who words, what they meant. The Queen bent and picked up her child; they found the note left by the witch. “Briar Rose shall prick her finger on a spinning wheel on her eighteenth birthday. That prick shall stop her heart from beating, bringing about the curse I have placed upon her.”

The Queen and King were worried about the curse, though they did not know exactly what it meant; did not know how her heart would stop beating but her body would not die? So they sent the baby to live with the three witches they had hired to make sure of their daughter’s beauty, grace and pose.

The years went by and the young Briar Rose grew up with a normal childhood, never once told that she was the heir to a mighty kingdom, which meant that one day she shall be Queen. She grew up as Twila, the ever loving peasant girl, who had the beauty of a queen.

On the morning of her eighteenth birthday she went upon her day as she normally would have; she got up and picked flowers, feed the animals, and went about her day. The witches, that were in charges of raising her, went to her after lunch as they needed to fit her for her new gown. One that was fit for a princess; as she was now of age, she would now go home and become the princess the land needed, it was time to return to the world of royalty.

They did the fitting and left to get some much needed supplies for the birthday celebration that was to happen that night. After all it would be her last night with them and they felt the depressed at that very thought.

Well they were gone; the other witch took her opportunity to lead young Twila to the spindle of her curse. With a bit of magic, she had Twila follow a small bird to the spindle that spun on its own accord, it weaved a string that was black as sin.

The witch used the bird, and spoke in a soft tone, she instructed Twila to prick her finger on the spindle needle. Which, of course, the young princess did, without hesitation. In that very moment her heart stopped beating. She fell to the floor. The three witches appeared instantly, but were too late to stop what had happened. Instead they froze time, they froze her and the kingdom in an endless sleep, that could only be undone by true loves first kiss. So they protected the sleeping kingdom until they could find a cure for the curse on the young princess, however they never found one. For many years, many decades, the kingdom was frozen in time. Many princes to come ‘save’ the sleeping princess, however the witches prevented anybody from reaching the sleeping princess, thus they left her in the frozen state.

One day a prince from a far away kingdom heard of the sleeping kingdom and thought of the land to be gained from such a union. So he set out across he many lands to get to the kingdom. Once there he faced the three witches, the first put up a field of knifes and spikes, that had to be carefully navigated, and could not be torn down. However this Prince, upon his birth, had been blessed by witches of his own kingdom, with the smarts, and a sword that could cut down any object within its path. He cut through the maze of blades, and made it to the second task set froth by the witches.

He reached a room of fire. The flames would burn through anything. The witches were sure that the prince would never make it through. However, also upon his birth, he was given a shield that would protect him from any supernatural danger. It allowed him to cross the flames of the witches’ passions. It allowed him to face the third and final task.

A monster of the worse sorts, part dragon, part Griffin, colored the deepest of blues with eyes the color of a sunset. A creature that was sure to kill the prince. The prince knew he would defeat it. He was gifted strength, brains and pride upon his birth. He fought though the flames of the creature dodged the spikes upon its tail, evaded the razor sharp teeth that tried to chop down on him, but in the end his sword met the creature’s heart, and it turned to dust.

The three witches looked on in shock as he stood by the bedside of the cursed Princess Briar Rose and he leaned down and kissed her. The moment the kiss ended, she awoke. But she was no longer human, her pale skin, had long ago shrunk. Her beauty she once held was gone; in its place was death. The prince’s kiss had broken the spell which froze time, but not the curse.

The Princess opened her eyes, she got up and then Briar Rose did the unthinkable. She attacked the prince! She bit him. He stabbed her with his sword, but still she came at him. He ran from her, and fell down the stars and broke his neck. The witches waited, their breaths held. They waited to see what would happen now as the undead Briar Rose started to move. Her beauty, her grace, and her pose all gone from her once lovely soul. She did not grow up royal; yet she is the one that paid for the sins of her parents.

The Queen locked herself in her chambers and cried out in pain as she watched her kingdom become the kingdom of the undead. She cried out to the witch that placed the curse upon her daughter, the one they didn’t invite because of her views of the world. “Hekate! Come to me! I beg you! Come to me! Make me a deal!” The Queen needed to stop the pain of her soul, the pain of seeing her daughter as a zombie. Her soul was drowning in the pain.

“Make me a deal! Anything! Reverse your curse! Allow my daughter a life full of happy ever afters.”

“Yes! Please I will do anything!” The Queen begged.

“Fine. I will reset time on these conditions and these alone! One, the child will be raised far from you. She shall be raised a poor child, that way when she is queen she will be fair. Two, no longer will you hire the witches to bless the children of royalty. Instead each child born in the kingdom will be bestowed one blessing and one hardship to overcome. And last but not least, your life for hers. You shall die in her place. It is the only way I can reverse time. I need to balance the universe. I took her soul, her life, so yours will be the price to save hers.” Hekate said with a sneer, sure the Queen would not take the offer.

Hekate was in shock. “So be it!” Hekate snapped her fingers and time reversed, the conditions now set in blood and soul.

“King Richard! You have a beautiful baby girl! Briar Rose! She was gifted with grace, but cursed with the inability to sing.”

“Fantastic!” The King said with a smile.

“But my King, we regret to inform you the Queen has died in child birth…”

“She looked at her daughter and said ‘For you my life.” Then she decreed that she shall be raised by the three witches away from the kingdom until her eighteenth birthday, when she will marry and she said she shall become the queen she never was, then she passed, sir.”

“Then may her wishes be fulfilled.” The King stated and walked way from the servant and his daughter, who would never know the curse once bestowed upon her…

Posted by Katherine Rochholz at 12:38 PM