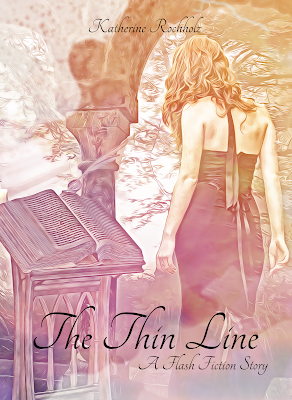 ‪            Blood. I could feel the dark red warmth drip down my fingers as I tried to stop the bleeding. I could see the red stain the pure white gown of my bride.  I had turned my back on tradition to marry for love, and my bride paid the price. The shot rang in my ears again as I woke up with a scream torn from my throat.
I took a deep breath. I looked down at my hands expecting to see blood, her blood, the blood of a truly innocent soul; instead the scar on my own chest glinted into the moonlight. I was dying, my soul had died. Where I was saved from death’s final grip, where I was prevented from leaving this mortal plane, my dear sweet bride died in my arms the day of our wedding, that cold, darken, gorgeous winter night.
I screamed at that moment, the moment where I realized it was not just a nightmare, but my living hell. I sat in my bed and screamed. I was a powerful and influential witch and I could not save my bride. I screamed my throat raw; then I got up and stumbled to the bathroom to look in the mirror.
My once icy blue irises were tinted black due to the magic I had been preforming since I woke from my coma three weeks ago. The magic that was forbidden in nature, the magic I had once swore to myself I would never even contemplate. But no matter the cost I was going to get my vengeance. I had forsaken my patron goddess, Astraea, and veered from the path of Justice into Vengeance.
I had done the darkest and most forbidden of magic to call for the lives and souls of those who were responsible for my soul being killed, for taking the one person who deserved nothing but love, life, and peace in this world away from me.
I closed my eyes as I thought of the pleasure I took as I ripped their still beating hearts out of their chests. I closed them against the visions of me taking their magic within a heart cut ruby, known as the Blood Ruby. A forbidden artifact that I searched the world over before killing the man who had it, he should have really just let me buy it from him. Their magic would be needed for the final ritual I had planned. The ritual that would seal my place in Hel, as I will have created a sin so grave, that my soul would be dishonored. I looked into the mirror. The price I had to pay was extreme; but then to do the forbidden magic I was about to do? It called for an extreme price. A price I would gladly pay, for I have crossed that thin line between justice and vengeance.
I stood in a black dress, a dress that matched my wedding dress, but it was now black with the death of my soul; the sun was setting, just like it had upon my soul.  I stood in front of my family grimoire, it had a forbidden section.  A section of magic that I only got to glance upon until I was twenty-one, before I had to embrace the rules set forth by our gods and mother magic, before I had to learn what I was forbidden from doing.
I looked at the evil I have already done, from the vengeance I sought, to the horrific things I have done for this ritual. In front of the grimoire laid upon the finish of silk was the preserved body of my beloved bride in her pure white dress, an exact replica of her wedding dress that night.
For this ritual I looked at the actions I had taken, from the killing of a pure silver dove for its heart, the trapping of fairies so they would die & burst into fairy lights, and the sacrifice of three innocent mortals. But it was worth it, for I could not live without her. Without her the darkness of my family magic would have consumed my soul. Like it had done on that moonless, starless, clear winter night, that I swore my soul and life to her, to have my own brothers rip my love, my happiness, and all that was good from my very soul.
So, tonight I give up a dove’s heart, two lives of fairies, three bodies of blood, and my very soul, all for her life.
Eos and Hecate forgive me...
Posted by Katherine Rochholz at 9:18 PM